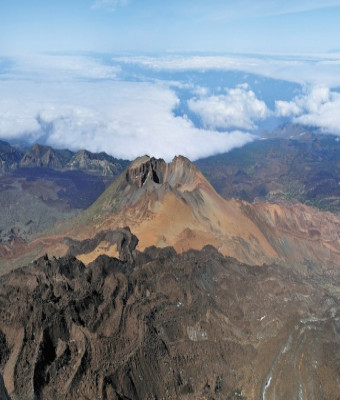 The Teleférico del Teide exclusively for you at sunset

Imagine that you go up on the Cable Car to 3,555 m high when it is no longer working for the general public.

And now stop imagining how impressive it would be because with the Cable Car activity at sunset you can experience flying over craters and lava rivers just before the sun goes down on Spain's highest point.

In addition, with Cable Car at sunset you will feel an authentic privilege.

The Teide Cable Car will only work for the exclusive group you will be part of.

Your friends will hallucinate with the photos that you won't stop posting on your Teide social networks and their views at that time of day!

Feel special and privileged at the highest point in Spain when using the Teleférico del Teide at sunset.

Did you know that Tenerife's volcano is one of the best places in the world to observe the formation and evolution of the Teide shadow?

It is this way thanks to the height of the volcano and to the fact that it has all the free horizons from its peak.

After the Cable Car at sunset you will find it hard to erase from your retina the spectacle of the projection of the shadow of the Teide on Gran Canaria. It is one of the most beautiful and spectacular moments that the volcano gives to its visitors!

The sunset of Tenerife in Pico Viejo with Teleférico you will never forget it.

The Cable Car activity at sunset includes a commented walk along the spectacular path to the Mirador de Pico Viejo.

An authentic viewpoint in itself!

From the Pico Viejo trail you can see, in the distance, part of the lava that was poured during the eruptive process of 1798 and which lasted 3 months!

The 1798 eruption gave rise to "Las Narices del Teide", the craters that during this historic eruption expelled the lava to the outside and which are located on the western slopes of Pico Viejo.

Hand in hand with our guides, in the Cable Car activity at sunset you will discover all the volcanic wonders of the surroundings of this imposing path to the Mirador de Pico Viejo; a path that, with the sunset, acquires a scenic and chromatic beauty that you will take time to forget.

The icing on the cake of the Cable Car activity at sunset is the film sunset that you will enjoy from the end of the trail to the Mirador de Pico Viejo.

If the weather conditions allow it, you will have a privileged view in front of you: the islands of La Gomera, El Hierro and La Palma on the horizon and the imposing 800 m diameter crater of Pico Viejo at your feet; a crater that once housed an impressive lava lake.